To live a more balanced existence, you have to recognize that not doing everything that comes along is okay. There’s no need to overextend yourself. All it takes is realizing that it’s all right to say no when necessary and then focus on your highest priorities.  – Stephen Covey

Putting “first things first” is making sure to always do the most important and critical things first and developing this as a success habit. Not only is this important for achieving more but it is proven that both stress and procrastination is caused by delaying the things you gut tells you must be done first. Of course it is easy to know you should “put first things first” and harder to actually consistently do it which is what we will look at here.

Not putting first things first can cause both stress and procrastination.

In Eisenhower’s matrix we learned how to separate what we have to do into quadrants based around urgent and important and their opposites and then with success lists we saw how to take this same principle to a micro level, prioritizing what we do day to day (or week to week) based on what difference that action will make. With “first things first”, the trick is to make sure to do these things first, not second, but at the very first opportunity we have. 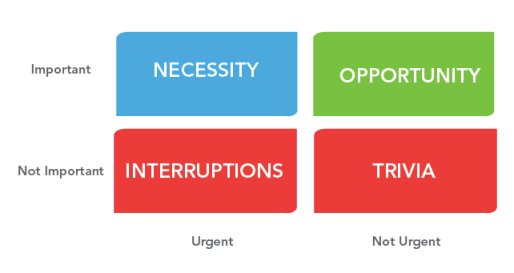 Looking again at Eisenhower’s matrix one can argue that quadrant I, phrased in the version above as “necessity”, will by itself push to be “first”as usually its urgency due to it being a crises, emergency or key blockage point will make dealing with it as non-optional. As we learned quadrant IV should be avoided at all cost and the trick with quadrant III is to identify and understand their difference to quadrant II and thus we would rarely choose to do them and would never put them first so it is in quadrant II where reminding oneself to put first things first is needed.

It is in quadrant II where learning to put first things first is most useful.

Quadrant II, the “opportunity” quadrant, or in a more traditional version of the matrix, the “important but not urgent” priorities, is in our success lists the “should dos” and this is where putting things first can be most practically applied. “Should do” tasks have already been selected due to their importance they play in our success but as they don’t by themselves force “urgency”, how do we choose their order? When deciding “first things first” with “should dos”, I have learned to ask myself the following questions:

The more “yeses” to the questions in bold, the more likely it is that I should be moving onto that task first. On a personal work level a task that is “feared”, i.e. a difficult staff conversation is one that is important to do as soon as possible, as fear needs to be faced head on in order to prevent it from turning into procrastination and excuse making. Likewise people tasks are important to do asap, especially if they involve emotions, as how people feel effects how they think and how they think (positively or not) effects their productivity and as people often like to share gripes, often one emotional issue effects many team players and can contribute to further conflict (when parties disagree), so “putting people first” is an important guideline of what “should do” tasks to do first.

Tasks that we fear should normally be done as soon as possible.

Also tasks that you don’t do that stop other people doing their work should also naturally usually be placed first, especially if effecting multiple people, as otherwise one task not being done, stops another (or more) from taking place. Likewise when analyzing what to do first, I do consider my own and my team’s ability and experience at doing that specific task. If we are very competent at it, I know, if other factors are not pushing it first, that I can risk leaving it to do later as I can rely on our ability to do it quicker and, if needed, to cut corners to get it done. For example, tasks I am competent at I will often leave to the last task of the day when frequently I am at my least productive and when i know i have fixed stop time, as I know I can rely on both my experience and ability to help me do the task faster or to enable me to make the needed time saving decisions easily.  With tasks that I am not experienced with I take the opposite approach where possible.

If you are competent at a task, it is easier to take the risk of leaving it to do last as if you run out of time you can fall back on on your ability to do it quicker or to cut corners. 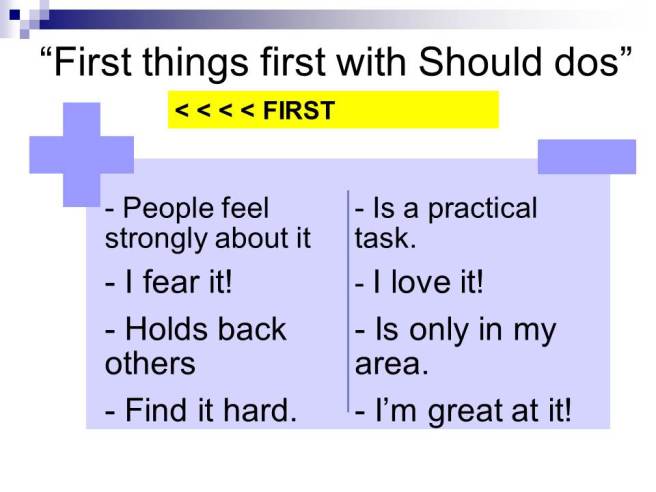 Putting the right things first will help make your team more productive and ultimately create a more positive environment to work in, especially if it becomes a team culture to strive to do that. It will also save time, allowing you to focus on the things which need your attention first, when your mind is at its most productive. Likewise it will sit hand in hand with Eisenhower’s matrix and success lists in keeping yours and your team member’s minds pushing in the most effective way towards set goals. Likewise it will keep procrastination at bay and help you to be a real example of an inside out leader, one that is capable of inspiring those around them to be accountable for their own greatness, by doing the things they most need to do first.